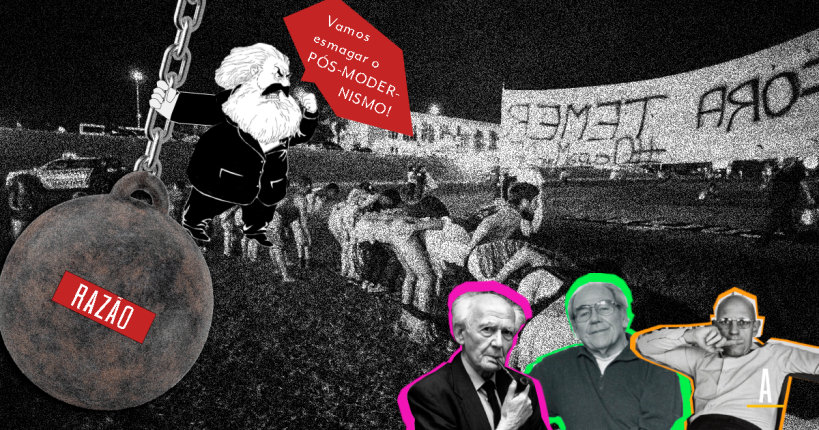 Today we feature a short piece from the Brazilian “Amigo Do Povo Magazine” on postmodernism.

In political and philosophical discussions of any kind, there is always the possibility of engaging in a debate in order to disqualify the debate itself.
Philosophical agnosticism or the statement that “since we cannot access such knowledge, we should not care about the truth behind it” is one of the faces of this ideological weapon, liberalism, which aims to stifle debate and disorient those who participate in it.

The so – called ” postmodernism “, which – in its various forms – represents the supreme degree of degeneration of liberal-bourgeois ideology, aims to add bases of support for statements of this type.

But what is this “postmodernism” quoted?

The great wars of imperialist prey, apparently, always provoke a wave of disdain for what is rational.
In effect, the first great “Crisis of Reason”, that is, the popularization of irrationalists and modern philosophical “agnostics” is given in the second half of the 20th century, when it was popularized due to the First World War, manifested in existentialism, phenomenology , etc.

After World War II, too, comes the second great “Crisis of Reason”, this time as a philosophical disdain for the entire philosophical legacy of the Modern period, ie, from the ends of the so-called Enlightenment to the peak of Kant’s great philosophical systems, Hegel and Marx.

Thus, such philosophy (carried forward by names like Foucault, Bauman, Baudrillard, etc.) is what is understood as “postmodern” – postmodernism -, since, although disagreements disappear here and there, they add consensus in the philosophical skepticism towards Modern production.

For the postmodernist, the search for truth in a society, as well as in the context of its construction or modification, is inevitably doomed to failure, since there is no “ truth ”, but many. After all, the potential discovery of a truth would come from a totalizing reading of reality, a “Great Narrative”, which these “ postmoderns ” deny.

If we want to understand this perspective, even if only for a moment, we are obliged to ask: what is its role, then, regarding the passive subject’s capacity to become an active agent, that is, to understand a society, to act on it and change it?
Should theory be understood as an analytical or scientific tool, as a guide for understanding and transforming social forces? If so, how can postmodernist theories help us to undertake such a task? Objectively, do such theories assist or hinder struggles for advances in society? It is still up to us to ask the ultimate question: could any progress in society be conceived or simply appreciated, in the bizarre, disfigured, perverted, deformed and arbitrary world of the so – called postmodernity ?

It is remarkable how the dogmatic rejection of an objective truth, based on material reality, can impose obstacles to a sober assessment of society, since there can be no consensus regarding any fact within the scope of the postmodernist ideal. Any attempt to analyze a phenomenon in the light of science will necessarily be faced with an infinity of questions about “totalizing theories”, “great narratives” and even the notion of “progress” itself. Now, this is all very reasonable and acceptable in the domain of pure idealism, where academic debates about the abstract and immaterial issues, inherent in the world of ideas, constitute an objective in itself.
Outside this scope, we must analyze in the light of dialectical and historical materialism, that is, of a scientific method that obeys objective reality as such, if we do not want to be deceived by the pyrotechnics of this new idealism. Ultimately, and objective reality and its history prove, that is, it pushes forward the social struggle and the individuals who take part in it, as the historical agents that they are.

For the same reasons mentioned above, the current irrationalists, lost in imaginative and self-absorbed debates, regarding the social and scientific process, do not advance even one step.

It is also evident that the “ postmoderns ” throw enormous confusion and objective obstacles in the democratic, popular organization – in the last decade, in Brazil, in fact, all very well verifiable.
We highlight, for the sake of example, the petty bourgeois and liberal directions that this set of ideas caused in the ranks of the movements of political minorities: anti-people, hedonistic culture and disconnected from popular reality; an amorphous mass of drunkenness labeled “militancy”; disdain for historical and dialectical materialism, etc.

So, what do we have here?

An irrationalist philosophy, born of the weariness and hopelessness of the bourgeoisie in the face of the decadent and dying world that it created, again, collapsing in hideous crises.
This dying world, moreover, devours itself, for it rejects everything that the best thinkers at the height of bourgeois optimism have produced.

We have, therefore, the sum of a constant denial of objective truth, the search for overcoming the current world and, finally, a disorganized and decadent practice, which divides the ranks of the oppressed in internal conflicts.

We ask: could any progress in society be conceived or simply appreciated, in the bizarre, disfigured, perverted, deformed and arbitrary world of ” postmodernity “?

And here we answer: no.

The sum of the irrationalism of the various strands of “postmodernism” leads only to the same depression and pessimism that forged this whole “school” of thought.

True progress, as well as real emancipation, goes through what surpassed the best ideologues of the bourgeoisie in its Golden Age: Marxism, today, Marxism-Leninism-Maoism.

In practice, we must refute and remove from the path of progressive youth – especially those belonging to groups of political minorities – these attractive academic illusions, demonstrating that the path to justice is the path of building a new world: of building the Revolution.